Trump is President – Now What? 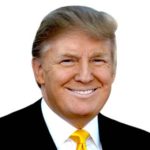 Well, a few hours ago, Donald Trump was sworn in as the 45th President of the United States of America.  What do we do now?  We pray for him to succeed.

First of all, let me say I am Canadian, so Donald Trump is *not* my President.  But for all my American friends, he *is* yours now.  He’s your leader.  He’s a huge influence to Canadian life by virtue of that fact as well.  If he fails; if he screws up; if he messes up life in general, we are all in trouble.

No amount of ranting, protesting, demonstrating, yelling, posting on Facebook, Instagram, or your personal blogs, is going to change that.

So you have a few choices.  1) You can complain, cajole and mock, which frankly will accomplish nothing except to give you ulcers and irritate friends who may agree or disagree with you, 2) You can hide in a hole for four years and pretend the whole thing didn’t happen, which is definitely not going to accomplish anything for you, your friends, your country, the world, or anyone! or 3) You can pray that over the next four years the decisions that are made by the President and his staff are the best decisions that can be made for the good of the USA and the world.

I’m not crazy about Trump becoming President, just as I’m not overjoyed that Justin Trudeau is the Prime Minister of Canada, but I’m praying for both.