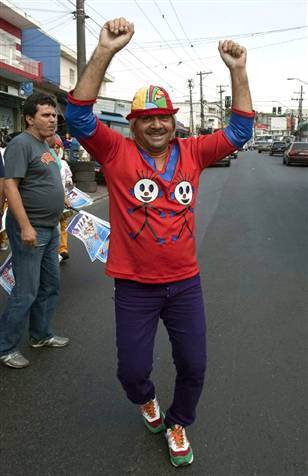 Here in Toronto (and I believe all of Ontario) the municipal elections are coming on October 25th.  Signs have started to pop up here in the city (they weren’t allowed to go up before today) and I thought it was interesting that today on MSNBC came a news story from San Paolo, Brazil that was entitled “No joke! Illiterate clown triumphs in election” (see http://www.msnbc.msn.com/id/39495001 for the full article).

It seems “Francisco Everardo Oliveira Silva, better known by his clown name Tiririca, received more than 1.3 million votes in Sao Paulo state in Brazil’s presidential and congressional elections. That was more than double the votes of the second-placed candidate in Brazil’s most populous state.”  His campaign slogan was “It can’t get any worse”, but apparently it just did.  It turns out that “Tiririca” (also know as “Grumpy”) is illiterate and in his campaign material it read… “What does a congressman do? The truth is I don’t know, but vote for me and I’ll tell you.”

What a sad story.

Now, I can’t tell you WHO to vote for (and in fact, at this point I’m not even sure who I’M going to vote for) but voting is your responsibility (assuming you’re qualified and eligible to vote).  People from all over the world come to Canada to enjoy the freedoms that our forefathers fought for — including the right to vote.  PLEASE don’t vote for clowns (figuratively, or literally)!!