Strength for Today and Bright Hope for Tomorrow

It’s hard to watch someone you love decline in their health.  Even when you know they’ve had a good, productive life it’s hard to watch as the strength is sapped from them and the inevitable transition appears to be coming closer by the day.  It’s especially hard when the person your watching is a parent, a spouse, or an in-law. 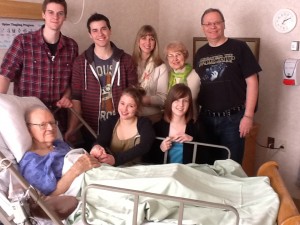 In this case it’s my father-in-law.  At 88 years old it was really hard to keep up with him as he ran around the cottage fixing things here and there; painting; repairing; and building.  Now, two years later, he’s approaching his final days in a paliative care hospital in London, ON, and while his sense of humour and his mind is still in good form, his body is slowly burning out.

Yesterday, we drove down to London as a family to visit him.  It wasn’t a bad visit, but it was short.  When we arrived he had been sleeping, and as my mother-in-law and wife gently wakened him, he roused to see our family.  We had a good visit, and managed to take few pictures of everyone gathered around the bed, but after about 10 minutes or so, it was obvious that he was tired again, and needed to rest.  He slept for a few hours while we visited with my mother-in-law, and then as he was receiving his dinner we roused him again and said our goodbyes.

While he was awake, he was cracking jokes, just like he always had done with our kids, and when it came time for him to say the blessing over his meal, he prayed a lovely prayer thanking God for our visit, and asking Him to bless our family, just as he had done so many times before.