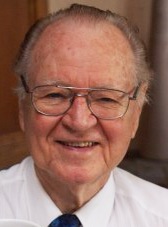 With deep yearning, yet with the joyful assurance that Morley is now in the eternal care of the One to whom he committed his whole life and ministry, we announce his passing at Parkwood Palliative Care on April 27th.

Morley was a graduate of Victoria University and Emmanuel College in Toronto. In 1948 he was ordained in The United Church of Canada, was married and pursued postgraduate studies at Princeton Theological Seminary, New Jersey. Energy and devotion were poured out on his pastoral charges, Thomasburg – Moira, Port Stanley – Dexter, Epworth in Kingsville and Metropolitan in London. Also during his tenure as Minister of Program for London Conference his creative spirit was given wide scope. Though retired in 1986, he went on to become president of London Conference and to enjoy membership within the warmth of the Byron United Covenant Church family.

His gentle, winsome spirit, combined with great strength of conviction, never ceased to have an impact upon everyone he met. Well done, good and faithful servant!

A Memorial Service will be held at Metropolitan United Church, 468 Wellington St., London on Saturday, May 12 at 1pm.