Fear of The Joker… 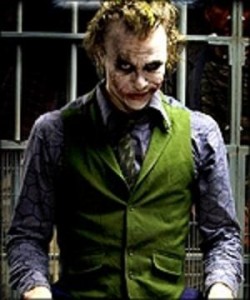 As you know, this past week has been a crazy time in the world.  In Toronto, there have been shootings 5 days in a row, and on Thursday night the horrific mass shooting in Aurora Colorado.

An artist we know and have seen a few times at Kingdom Bound by the name of Eric Samuel Timm posted this wonderful entry on his Facebook page last night.  Read it here, but follow Eric on Facebook or Twitter, or check out his art etc on his webpage (No One Underground).

Tonight a “joker” might get you or a bat might eat you…The dead of Wednesday night, on vacation, a bat was in our cabin. My friends wife was paralyzed by fear because she couldn’t control where the bat swooped. Just the thought of the bat landing on her hair made her body contract to a rigidity unmatched by nature except that of wood.

On schedule, during the next night which was Thursday, at the cabin, the smell of fear crept in and seemingly easily roamed about. The fear of the bat.

Thursday night and late into early Friday morning was not a good night for my friends wife, because we fear.

I slept like a baby, in a different cabin but that’s not the point. The point is we FEAR.

We fear the things we cannot control on this earth.

That same early Friday morning fear showed up 1046 miles away. Later confessing to be “the Joker” in Colorado, on the opening night, of the new Batman, a gunman started shooting and seeming easily roamed about. this time not in a cabin, but in a packed movie theater, killing 12 people, physically wounding 58 and emotionally wounding millions, with wounds of fear.

On schedule, tonight, Friday night, in millions of people’s minds, fear is creeping in and easily roaming about. The fear of another joker, the fear of man. The question lingers…Could this happen in my theater? Because we fear.

We fear the things we cannot control on this earth.

We fear mankind, because we cannot control it, just like the bat in the cabin.

So, I’m going to the movie.

I’ve chosen to not fear what God has Lordship over…fear, man, bats, jokers, everything.

But still, if your like me, you just flat out don’t “understand” the shooting.

Why? is always the question.

A question an older Bruce Wayne began to ask with intent to even the score years later after his parents were innocently gunned down when he was a boy.

Bruce Wayne found this out in his first attempt to even the score in Batman Begins,   And I quote…

Carmine Falcone: “People from your world have so “much” to lose. Now, you think because your mommy and your daddy got shot, you know about the ugly side of life, but you don’t. You’ve never tasted desperate. You’re, uh, you’re Bruce Wayne, the Prince of Gotham; you’d have to go a thousand miles to meet someone who didn’t know your name. So, don’t-don’t come down here with your anger, trying to prove something to yourself. This is a world you’ll never understand. And you always fear what you don’t understand.”

My questions I have asked myself…   What’s you bat? What’s your joker? What about this you don’t understand that causing you to fear?   Gods words contradict our greatest natural, earthly and unknown fears.

If our hope is Him and tragedy strikes, we still have hope.

If we have lost this hope or turn to question God, when tragedy strikes, maybe if your like me, what we lost wasn’t security, a loved one or the planned future, but what we lost was our peace.

Furthermore, If what we lose causes us to question God maybe what we lost what was our god.   Do not lose your peace!   When I am afraid, I will trust in you. In God, whose word I praise, in God I trust; I will not be afraid. What can mortal man do to me? Psalm 56:3-4   Do not fear.

On your way…Pray for peace for the families affected and the man in prison.